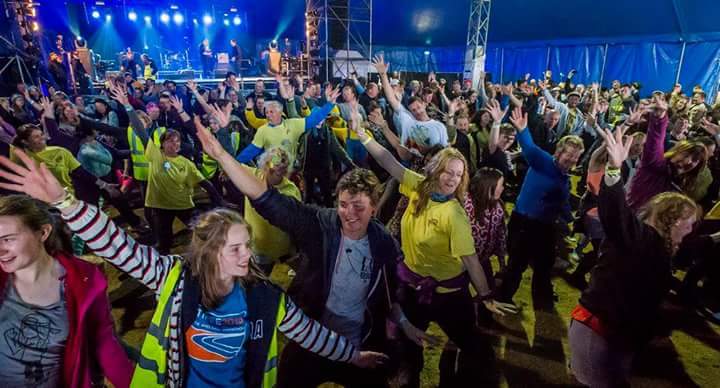 It’s hard to believe that TMF 2016 was only 3 weeks ago!  Before you start to search your brain or google for the meaning of this latest acronym don’t worry, it isn’t some new construction or training phrase that you have missed. TMF is one of Scotland’s leading music festivals and short for Tiree Music Festival.

The Festival was started in 2010 by Daniel Gillespie (of Skerryvore fame) and Stewart MacLennan (equally famous for being the nephew of our very own Trudy MacKenzie).

From fairly humble beginnings, the festival has grown considerably and gone on to win a host of accolades including Best Small Festival at the Scottish Event Awards.

Trudy has donated her Not For Profit time to TMF since it first began and is now a key member of the volunteer team. Having arrived on the island just after TMF 2015, Claire was keen to take part too and so she used some of her NFP time to join the registration team.

“The atmosphere was terrific and it was so much fun to welcome this surge of visitors to our island, as well as enjoying some of the amazing acts on stage…it was great to see our Andy (Esteem’s Business Development Co-ordinator) perform with his band Trail West and another highlight was the American artist Jesse Terry, who blew me away with his gorgeous voice”

Esteem have a history of encouraging the use of NFP time within the team and the time spent at TMF was well worth it for Trudy and Claire – here’s to TMF 2017!