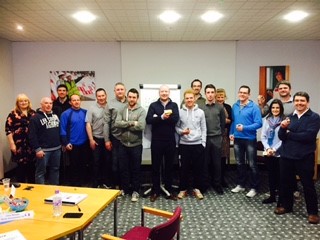 You can’t say that Trudy doesn’t look after her workshop candidates!

Last week they attended the Legalities and Standards workshop and not only did they get to hear from guest speaker Gavin McGuire, the newly appointed FMB Northern Ireland Director, but Trudy also gave them all some chocolate to munch on.

No one told me you get chocolate while you study?…I might have signed up!